The Other Place to Go

Shapell is the beverage director of Win Son, one of the most innovative restaurants in Brooklyn. Recently I had one of my best Chinese meals in this hemisphere there. It’s a place where the seasoned eater can throw back some Beijing zhajiang mian alongside pork bellies and an oyster omelet. It’s also a place where Chef Trigg prepares fried eggplant with labne and tops it with a gastrique.

The menu contains enough authentic Chinese flavors to satisfy the purist, but it also delights and surprises.

“Trigg’s real gift is that he’s not that fussy, and he’s got so much skill and research, and he’s put in a lot of time at really great restaurants—he’s done a lot of awesome things—so if he’s going to something European, it’s going to be a fusion style,” explains Shapell. “It gives all the dishes room to breathe, that kind of hyphenated ‘American’ after the word Taiwanese allows us to carve out more space to express ourselves.”

The drinks list at Win Son also fully embraces the hyphen. Flavors of the East are entwined with a distinctly American cocktail concept. When Shapell joined the team in 2016, he inherited a solid drinks menu developed by Brett Helms. It included offerings like the Vaquero Chino, a chili-infused Scotch sour with Thai basil, and the Breakfast of Champions, which pairs dark rum, peanut milk and toasted black sesame seeds.

Says Shapell of the latter, “That’s a really excellent illustration of taking a culinary idea from one culture and combining it with a cocktail aspect from another culture and—poof—you have this pretty elegant but kind of fun meshing of those two cultures.”

And did I mention the baijiu? Shots and cocktails, no less. More on this later.

“People don’t just hand you shit because you want it. You have to work really hard for it.”

A New England transplant, Jesse arrived in New York by way of Ohio in 2010. He had studied Latin at Oberlin, was considering a career as a librarian, and had never worked in the service industry. He reached out to his cousin Lynn Wagenknecht, a successful restaurateur, for a job. She let him check coats at Cafe Luxembourg.

It was at this point he realized, “People don’t just hand you shit because you want it, you have to work really hard for it.”

Hospitality was a good fit. A year later he started at Barboncino, a busy neighborhood pizzeria, where he worked his way up to floor manager. This was when he was given his first crack at a beverage program, where he was in charge of everything but the wine list. With an range of cocktails, shaken and stirred, he learned to manage inventory and costs, and concocted a few original drinks on the side.

His next gig was a couple-year stint as bar and floor manager of Isa, a Mediterranean restaurant with a regularly rotating cocktail menu. There he further developed a taste for funky natural wines and craft spirits with a sense of place.

It was around this time that Josh Ku—a friend of a friend from college—began swinging by Isa to pick Jesse’s brain for a restaurant project. Josh is a Taiwanese-American, born and raised in New York. He had teamed up with Virginia-native Trigg Brown to create a fun neighborhood restaurant with a Taiwanese influence that would be affordable, “something that you can repeat and enjoy during a month,” as Shapell puts it.

Win Son opened its doors in 2016, right when interest in Taiwanese food was taking off in New York. Its success prompted Ku and Brown to take on a more ambitious program. “They got popular so quickly and that really accelerated what they wanted to do,” says Shapell.

They reached out to Jesse, who was then considering opening his own wine bar, and they asked him to come on as a temporary management consultant. Jesse had never worked at an Asian restaurant before. Taking on a drinks program that had great fusion cocktails and “leaned heavily on Taiwan beer,” he overhauled the wine menu. When he left in January 2017 he left things better than he had found them.

A few months later he was offered a job on a permanent basis. It was a two-for-one deal, where Shapell would manage Win Son’s beverage program and come on as a partner for the team’s next restaurant (Win Star No. 1, a more casual Taiwanese-American concept focusing on roast chicken, set to open across the street in early 2019). It wasn’t what he had planned to do, but he loved the team and project. “I felt like I just couldn’t say no.”

In September of 2017 the management team gathered for a tasting of Kinmen Kaoliang, a light-aroma baijiu that dominates the Taiwan market. Jesse had never tried it, but quickly discovered that baijiu combined two things he had never encountered before in a spirit: funky flavors and terroir.

“I was pretty much in love with it the minute I tried it,” he recalls. “It was like the first time I tried Fernet Branca or one of those bracing spirits, where the first time you try it, it’s not repulsion that’s gripping you, but it’s that thing that’s like ‘Holy crap, this is weird! I can’t wait to try more of this’.”

Shapell had been managing drinks programs for long enough that he had assumed few surprises awaited him. “I thought I had reached the end of my time of discovery, and that all that I would be left with in the cocktailing world would be auxiliary, ancillary cool cordials and liqueurs, or craft American whiskies and things like that,” he says. “So when I tasted Kinmen Kaoliang and I thought, oh, not only is this a base spirit, this is one of hundreds of baijius, and within that group there are so many other styles. I couldn’t believe that there was an entire other place to go to.”

Kinmen became Win Son’s house baijiu, in both the 58 and 38 percent alcohol by volume iterations. The lower-proof expression was used for happy hour and end of the meal shots, whereas the higher-proof was reserved for cocktails.

The first cocktail was a rare case of baijiu kismet. Playing with the herbaceous quality of light-aroma baijiu Shapell’s instincts told him to swap the Kinmen for gin in a summery Negroni riff. He used a light vermouth and threw in a couple of bitter ingredients, Contratto Aperitif and Cocchi Americano. It needed a little acid so in went the lemon juice and the Kinmen White Lightning was born.

“It took a matter of moments for it to come together,” he explains. “It was one of the most serendipitous cocktail workshopping experiences I’ve ever had.”

Getting customers to try the baijiu became a personal calling. “People were interested. I don’t know if it was always what people thought it was going to be, but thankfully because we’d talked to the staff a number of times about the importance of having Kaoliang on our menu, and the bartenders really liked the cocktail itself, there was enough staff enthusiasm and staff push to get it in people’s ear.” When his friends would come in he would make them and their dates try it. “Guests were enjoying it, the bartenders were liking it, the staff were selling it and my friends corroborated that it was a fun and balanced cocktail.”

More recently Shapell has added the Buddha Bless, a summery sour made with Ming River Sichuan Baijiu and Cap Corse apertif. I was lucky to be one of Shapell’s taste testers, and was unsurprised to learn that it is a strong seller.

As a manager Jesse’s interest is less promoting unusual spirits than making the numbers work, but he sees a future for baijiu in the local dining scene. “If you have someone who is in charge of your beverage program and in charge of leading salesmanship among your staffers, if they have a keen eye for good-costing of a beverage program baijiu—there’s too many options for it to not find a place in more restaurants, especially in New York.”

His primary concern when creating a drink is that the base spirit is something affordable and tasty, and he thinks the high proof baijius offer value. “The fact that you don’t need quite as much of it in the drink for people to get the full effect and experience of it, regardless of its strength. Between 40-plus and 65, that’s ample spirit. If you augment that with supplementary spirits to make a cocktail then you have a drink that’s got the appropriate amount of alcohol in it, and enough of the flavor.”

“My advice is my bias. I have a real deep interest in aromatized wines and liqueurs and cordials and fun nerdy European lower-ABV spirits. Pair [baijiu] with the things that you find interesting in cocktailing. Don’t just use it in lieu of another spirit,” he says. “It’s so expressive . . . that you might as well pair it with the other things you like. It might take longer but you’ll find something that’s got more personality.” 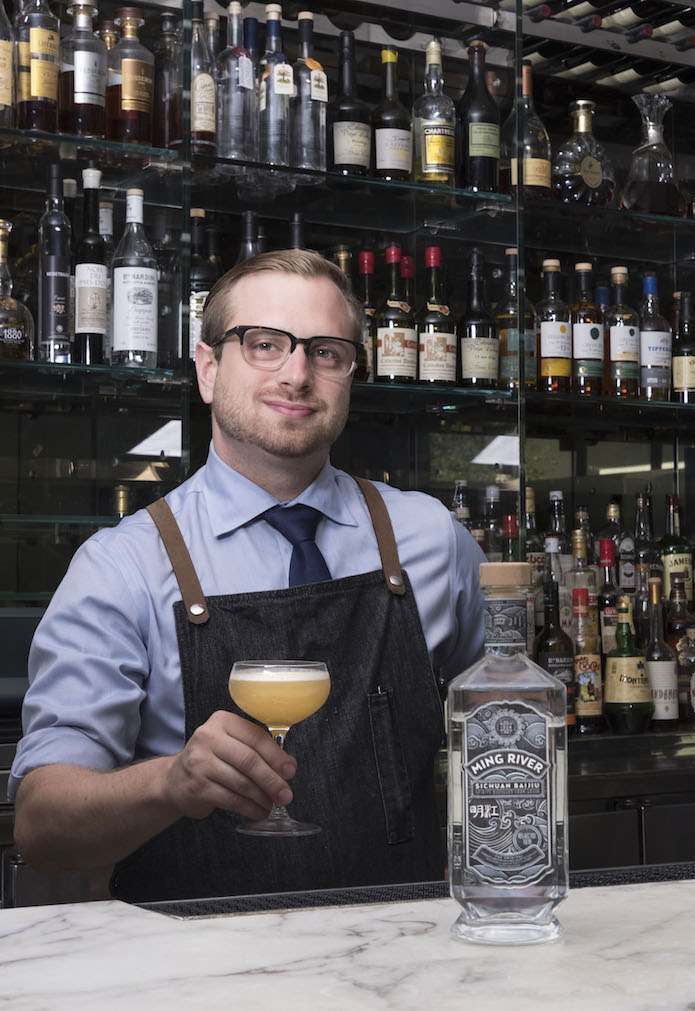