Taking the Time to Appreciate Baijiu

My day job involves regularly talking to rooms full of strangers about the wonders of Chinese spirits. It’s rare to encounter people who have tried many baijius, rarer still are those who knows much about the category. Rarest of all is someone who regularly consumes baijiu off-the-clock. This is the peculiar situation of Loo, beverage director at Waldo Thai in Kansas City.

Finding baijiu in Kansas City is a minor miracle. My hometown is many things, some of them wonderful, but it is not especially cosmopolitan and it is seldom at the vanguard of gustatory trends not involving slow-cooked meats. But Waldo Thai stands apart. It is outstanding, serving some of the best Thai food I have encountered in the Western Hemisphere, and it has a fantastic, and fantastically creative, cocktail program. I’ve seen Loo incorporate everything from Chinese tea to fish sauce into his drinks, always with spectacular results.

Loo reached out to Ming River Sichuan Baijiu before we had publicly announced our intention to distribute baijiu in Missouri, making Waldo Thai our first customer in the market. So on a recent trip home to see my parents, I snuck off one day (sorry, mom and dad) to give a baijiu talk there and to meet the man who had piqued my curiosity from afar. 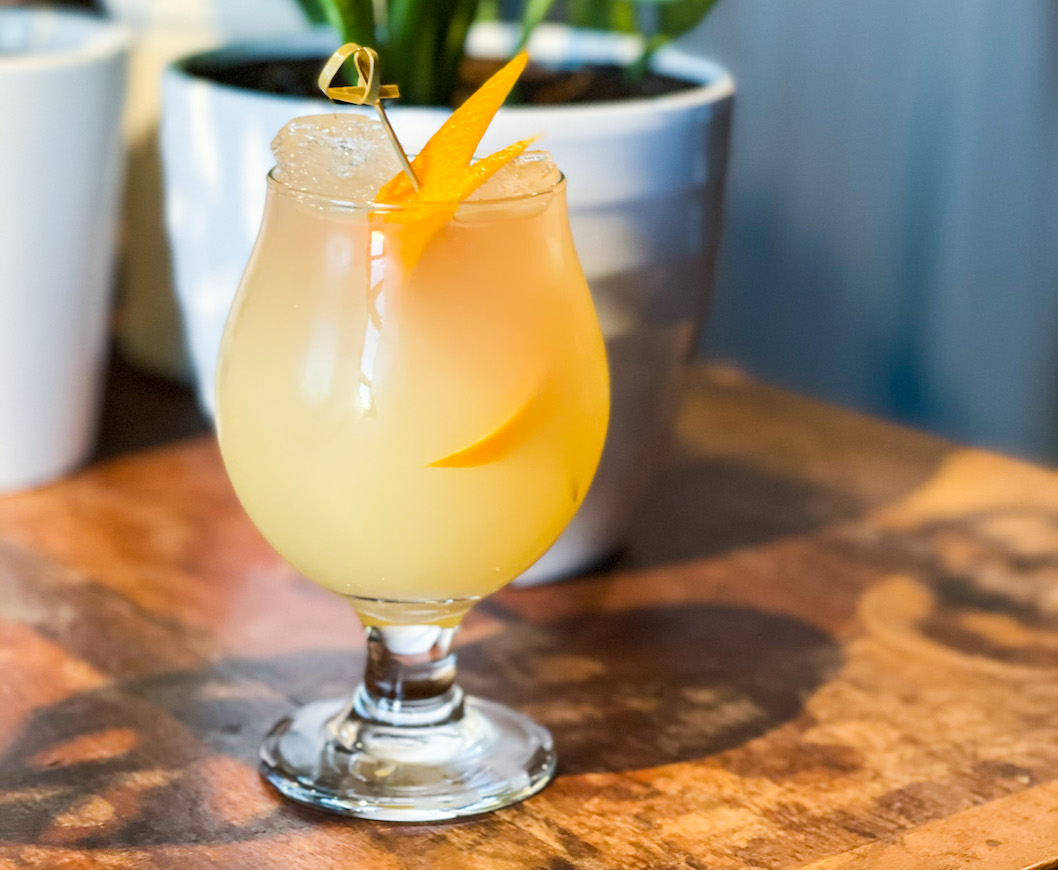 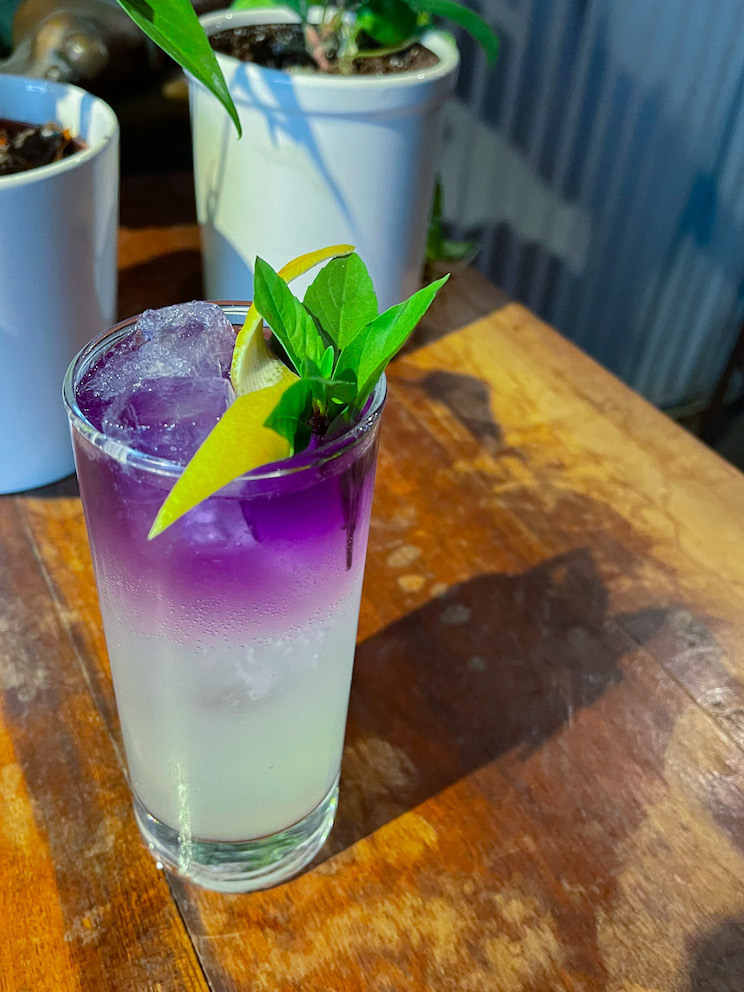 Drink Baijiu: What made you such an early adopter of baijiu in your cocktail program?

Darrell Loo: I think it has a lot of potential, especially with Asian food. That hint of sweetness in baijiu itself, that funkiness—it just complements Asian food so well. I was very excited to see when it first came on the market.

DB: How’d you get into bartending?

DL: I wasn’t going to get into it. [Laughs.] Somehow, I just ended up doing it. One of my favorite bars in town that I usually hang out at (Julep), they were looking for people. I was like, “Yeah, maybe I can help. Serving a little bit.”

I already spend my money there, I’m already there most of the time, I might as well just work there. It was a whiskey bar, so after a year or two we talked and they said, “Okay, maybe you want to hop behind the bar?”

I was like, “Er, maybe not. It seems like a lot to learn.” Plus, I had another daytime job. I work for a university. I’m an international student recruiter and admission councilor. I ended up behind the bar and the next thing you know one thing led to another.

In Asian cultures, working behind the bar or working in the service industry is not necessarily your first choice of career. Your parents will never approve it. You have to become a doctor.

We having a saying back then: You have to study hard if you want to work in places that have air conditioning. You need an office job—you’re supposed to make your parents proud, become a doctor or an engineer, that kind of stuff.

So, yeah, I was reluctant to go into this industry, it was never a thing for me to pursue it the way I’m supposed to. But I somehow ended up in it and I’m having fun here now. 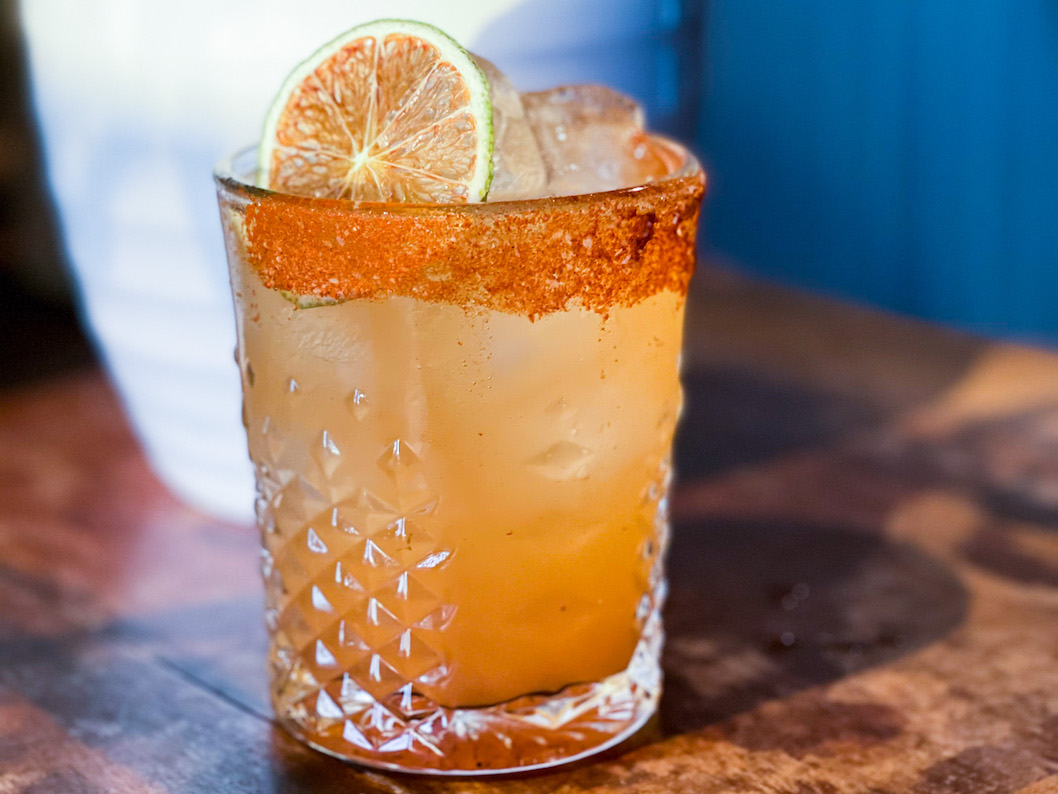 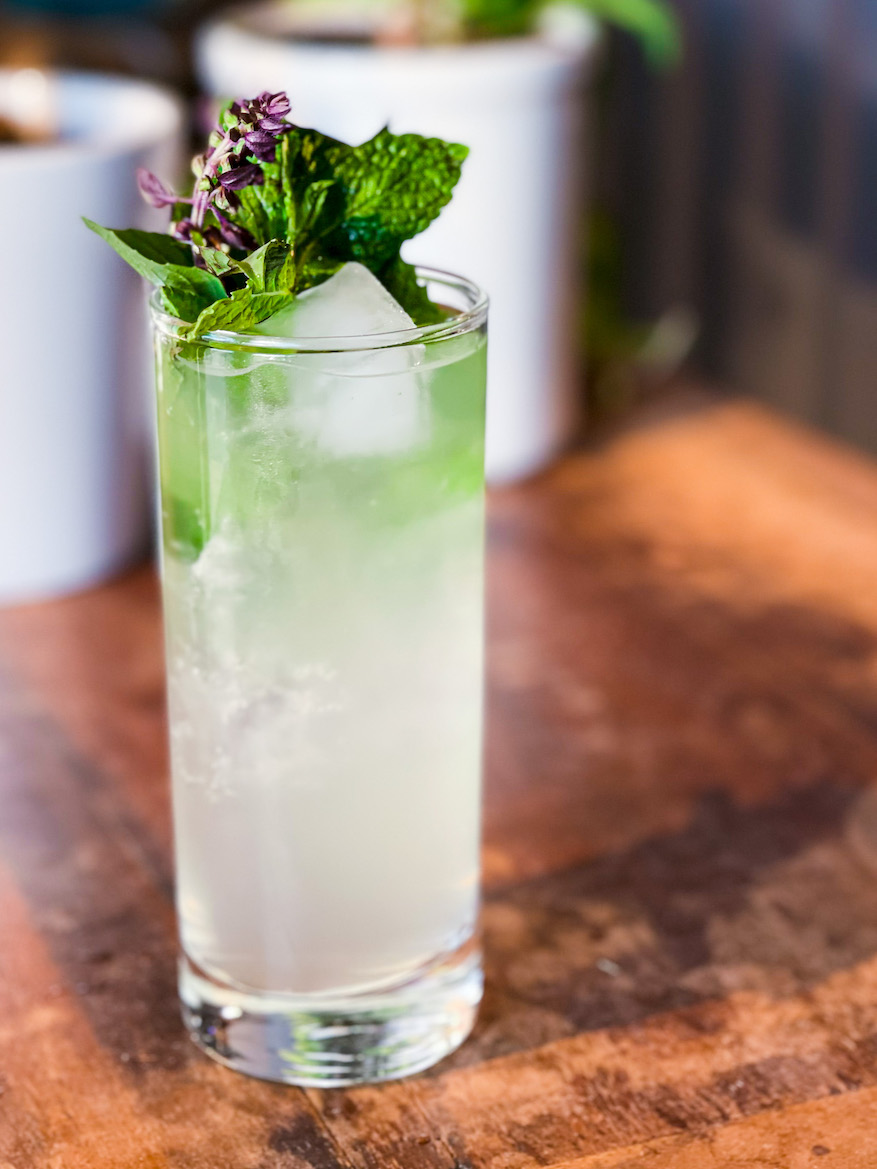 DL: We did, doing take-out only. We hustle, Asian people, we’re always hustling to try and find a way. We have a really cool chef, Pam Liberda. When we opened this restaurant, we had our own vision. We’re trying to do something different. Not to be different, but we’re trying to be more traditional this time. If you’re in Kansas City, the first Thai restaurant that opened in Kansas City was opened in 1991. It was opened by our chef’s mother-in-law [Thai Place in Overland Park, Kansas]. Back in the 1990s, you couldn’t just serve what you eat. You adjust the recipe, you make it more Midwest friendly.

DL: Yes. Bigger portions. When we first opened [this location] we wanted to start doing normal stuff, like what we eat. We wanted to bring back the dignity of our own food. We have to be proud of what we eat, and proud of our own culture. There’s really no need to just change things.

Pam wanted to serve real Thai food. She was like, “I want a bar program that actually does that.”

And I said, “If you give me money to buy whiskey, I’ll come do that for you.”

Here, what’s a little bit different is that she respects what I’m doing behind the bar. A lot of times, when we do a new menu, we all sit down and together. It’s not like chef does her menu and everyone follows. She takes input and everything, so it makes things really easy and fun. And she’s open to the idea of playing with new stuff.

If I want to do an orange wine dinner, she’s like “Really?” And I say, “Really, it’s fun. Let’s just try to do it.” It’s just been a fun experience since then, and I’ve started doing things a bit differently than before.

DB: What made you decide to add a Chinese liquor to your program?

DL: I’m originally from Malaysia, a Chinese-descended Malaysian. So we play with a lot of Chinese products in cocktails. Other than we use a lot of pandan leaves, makrut lime leaves, lemongrass. Because of my own background, I love to use oolong tea in my cocktails. We do a lot of oolong tea-based cocktails. Chrysanthemum. We play with loquat, monkfruit, that kind of stuff.

Kinmen Kaoliang is the [baijiu] we normally drink here. We leave a couple of bottles here in the freezer that we just chug—well, not chug—drink at the end of the shift. And when [Ming River] came in the market . . .  I reached out to Vintegrity [the distributor] and said, “Hey! I heard you had this.”

And they said, “It just came in. How did you know?”

First time I tried it, I was like, I want to do a Paper Plane variation. So we do a smoked blood orange and lemon oleo saccharum, Amaro Nonino, Aperol, cinnamon and star anise, then we do a paper crane garnish, and then we call it Paper Crane. [Note: Not to be confused with David Putney’s also delicious Paper Crane.] It was a lot of fun.

When it first came out, people said, “Oh my god, what is this?”

DB: How did people respond to it?

DL: Well, it’s being presented in the cocktail form, so people like it. But it’s always fun to see people drink it straight. They’re like, “This turned into this?” Yes.

The cocktail today is more refreshing and aperitif style. But there are more bartenders [attending], so I try to make sure that the dominant factors of baijiu actually stand out. I’m not trying to complement it, I’m trying to make it stand out, so that everyone gets to taste that flavor. I think bartenders drink a little bit differently than customers, so we can have a little more fun with it, especially in the Midwest market.

DB: What’s your approach to working with baijiu?

I drink a lot of baijiu myself, so it’s a little bit different, but I think introducing it to the market I think will be fun. It’s definitely fun to see this kind of variety, especially in America.

DB: Do you think it’s easier or harder to introduce new Asian products in a city like Kansas City?

DL: It’s both, because I think it has to work with people’s perceptions about Asian spirits. When you talk about Asian spirits, what comes to mind is sake and soju pretty much … Baijiu, people don’t really know about it. It’s easy to spot their interest and let people try, but also I think baijiu is not something that everyone will try for the first time and like it immediately.

It takes time to actually appreciate it. So it’s easy to persuade a customer to try it, but it takes a longer effort to make them actually love it.

DB: Is there any advice you would give to bartenders working with baijiu for the first time?

DL: You definitely have to try it yourself. Not like taking a shot yourself, but you definitely need to taste it like you taste whiskey. It’s not going to be fun, because a lot of times it’s hot. It burns, you know. But you to start appreciating the quality of it.

The first time I was drinking bourbon whiskey, I was like, “Umm, it’s just not very good to me.” You have to make it into a product that you’re familiar with, for example, people will describe bourbon as a lot of butterscotch and vanilla, caramel, but for me I’m trying to relate to food and aroma that I’m more familiar with. Like, I drink a lot of Chinese tea, so I say it has baihao.

Check out the recipe Loo developed for the baijiu event that day here, and you can find an entire series of Thai-inspired baijiu cocktails he has developed here, here, here, here and here. And if you find yourself in Kansas City, do yourself a favor and check out Waldo Thai. You won’t regret it. 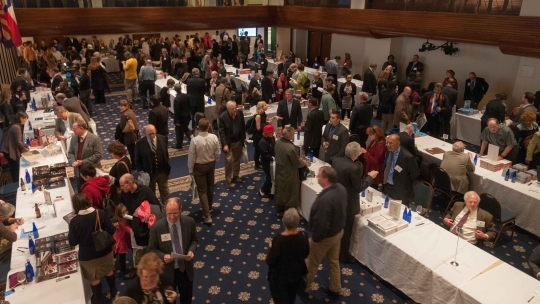 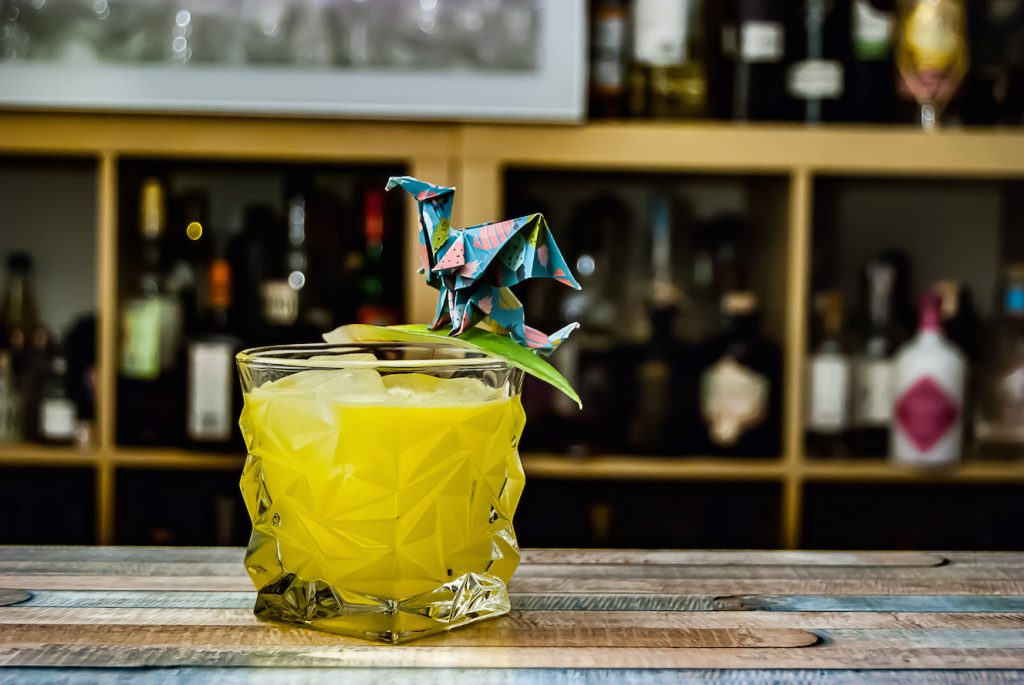