Been away so long I hardly knew the place

Did you miss us? We missed us, too! But here we are all jabbed up, flexing those antibodies and ready to party.*

So what’s new in the world of baijiu? Quite a bit, it turns out. COVID-19 has had a negligible effect on the baijiu business, and sales in China are strong as ever. That’s Magazine has a double-barreled monster featur about the state of baijiu at home and abroad. Speaking of globalism, Buffalo Trace has cooked up a little whiskey-baijiu hybrid.

Other things remain very much the same, as international media remains laser-focused on the price of baijiu stocks. I’ve made a conscious decision to push the Moutai stock price stories further down the news feed. The stocks go up, the stocks go down, but mostly they go up. Make up your mind already.

And if you’re looking to brush up on your baijiu knowledge, we have hours of multimedia content for you. There’s a Youtube trip inside China’s oldest distillery, a breakdown of the category from our friends at WSET, podcasts, academic studies and more.

Finally, Drink Baijiu would like to take a moment to acknowledge the awful spate of violent acts and rhetoric against the AAPI community. Sadly, these problems aren’t new, but these past months have been especially challenging. If you care about the food culture we’re trying to promote, we urge you to join us in condemning AAPI hate and consider supporting the community, if you’re in a position to do so.

*Drink Baijiu isn’t here to tell you how to live your life, but if you can get a COVID vaccine and you haven’t yet, do the yourself (and the rest of the planet) a favor and get that stuff. You get the shot, the next shot’s on us, if we meet in person.

Pappy Van Winkle Distiller Experiments With a Baijiu Whiskey—Brad Japhe, Bloomberg
So here’s the deal. Buffalo Trace made a “baijiu-inspired” spirit, and everyone wants to know: IS IT BAIJIU? My answer: Who cares? It’s a fascinating experiment, making a whiskey with light-aroma baijiu ingredients (sorghum, barley, peas). Never mind that the barley and peas are qu ingredients, it’s good fun, even if it probably doesn’t taste like a traditional baijiu. But name a spirit that hasn’t benefited from cross-cultural interactions. We have requested samples and will report back.

How China’s Baijiu is Entering a New Era of Innovation—Joshua Cawthorpe, That’s
In an attempt to answer how today’s baijiu producers are responding to waning interest in baijiu among China’s younger generations, Cawthorpe journeys into Chinese drinking culture’s past, present and all points in between. Well worth a read. Bonus: Check out Sophie Steiner’s list of “Established and the Up-and-Comers in the Baijiu-verse.”

Sales of Chinese Baijiu Go Gangbusters During the COVID-19 Pandemic—Tara Nurin, Forbes
“The numbers would have shocked financial analysts in a normal or even strong market period; the fact it’s happening during the worst health crisis in a generation is nothing short of mind-boggling.”

A Grand Ceremony of Baijiu-Storage in SW China’s Luzhou City—CGTN [Youtube]
A fully-dubbed journey into the annual Dragon Head Raising Festival at the Luzhou Laojiao Distillery. It’s a verrrrry long video, but within it is an excellent step-by-step look at that strong-aroma baijiu production process, which is rarely captured in English-language media. Worth checking out!

China’s Baijiu Giants: the Most Valuable Drinks Companies in the World—Ian Buxton, Master of Malt
A handy explainer on why the world’s three most valuable spirits producers are all located in China, and Western spirits behemoth Diageo trails them all.

Chinese Liquor Stock that Drew Comparisons to Bitcoin is Clinging to 2020 Gains—Evelyn Cheng, CNBC
March: “…the Bernstein analysts still have a ‘buy’ rating on Moutai and a price target of 2,500 yuan a share. That’s up more than 20% from Moutai’s Friday closing price…”

Characteristics of the Microbial Community in the Production of Chinese Rice-Flavor Baijiu and Comparisons With the Microflora of Other Flavors of Baijiu—Hu Yuanliang et al., Frontiers in Microbiology
This study is emphatically not light reading, but it’s notable for a couple of reasons. First, it provides a comprehensive breakdown the fungi and bacteria found in seldom-discussed rice-based small-qu baijiu. It also provides a scientific grounding for something I always suspected about baijiu complexity: The lengthy fermentations periods in certain styles have a direct correlation to the aromatic compounds found within those styles. Compare rice-aroma baijiu with 11 major compounds discovered in this study to light-aroma baijiu (~50) and strong- and sauce-aroma (~100 each).

Relationships between Consumption Patterns, Health Beliefs, and Subjective Wellbeing in Chinese Baijiu Consumers—Debra Ann Metcalf et al., Substance Abuse Treatment, Prevention, and Policy
Back in my China-based days, I used to chuckle to myself whenever someone told me how healthy baijiu was to drink. I always assumed this was just a bit of marketing nonsense rather than a widely held belief. Not so, this survey of drinking habits and attitudes concludes: “Alcohol consumption, and in particular the consumption of baijiu, has cultural associations with health, happiness and prosperity in Chinese society.” As the researchers note, this could be a real headache for public policy experts trying to reign in unhealthy drinking habits.

Baijiu!—China Talk Podcast
A wide-ranging conversation about my experiences, good and bad, with baijiu and the role this iconic drink has played in Chinese society.

Introducing Baijiu to Western Consumers, with Derek Sandhaus—China Corner Office Podcast
Another great discussion, albeit one more focused on the business aspects of my experiences with baijiu. 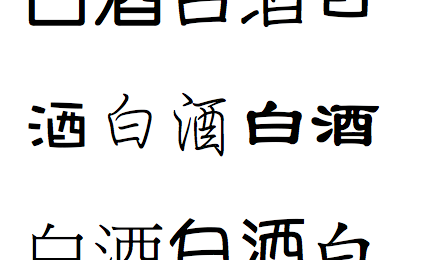